After a long and acrimonious legal battle with his teacher Friedrich Wieck, Robert Schumann (1810-1856) married Wieck’s daughter Clara in 1840. It was a day before her 21st birthday.

Liederkreis, Op. 24, composed in 1840 to poems by Heinrich Heine, was a gift to Clara imbued with his love for her. It is full of secret messages and ciphers.

Donald Macleod spoke to Iain Burnside about these coded messages and to Roddy about the strangeness of returning to sing in a theatre.

Roderick Williams played the poet Olivier in Richard Strauss’ Capriccio at Grange Park Opera  in 2010. He was the featured soloist at the 2014 BBC Last Night of the Proms and won the Royal Philharmonic Society’s Singer of the Year award 2016. His artistry and intelligence is legendary.

I. Morgens steh’ ich auf und frage (daily hope for his beloved to come to him, and his nightly disappointment when she does not)

III. Ich wandelte unter den Bäumen (grieving, he wanders in the woods and finds that the birds already know the word that brings back his sorrow: they heard it from a pretty young woman)

IV. Lieb’ Liebchen (his own heartbeat is like a carpenter making a coffin)

V. Schöne Wiege meiner Leiden (he laments he ever met his beloved and bids farewell to the town)

VI. Warte, warte, wilder Schiffmann (he tells a boatman that he will come to the harbor to leave both Europe and his beloved)

VII. Berg und Burgen schaun herunter (In a boat on the Rhine, which is both beautiful and doom-laden –like his beloved)

VIII. Anfangs wollt’ ich fast verzagen (He can bear his sorrow but does not want to be asked how)

IX. Mit Myrten und Rosen (His songs are cold and dead but he hopes that one day a spirit of love will rejuvenate them and that his beloved will find them)

Boil potatoes tis just cooked (15 – 20 mins) drain. In a bowl, mix lemon zest, half lemon juice with the vinegar. Pour in three times as much olive oil as vinegar; add the capers. Season. Mix well, then add the warm potatoes tossing until well-coated. Sprinkle over most of the dill / fennel tops

Finely grate the horseradish into a bowl – be confident with the amount. Mix in the crème fraîche, remaining lemon juice and season.

Lay the smoked salmon untidily on a big plate. Pile the dressed potatoes on top. Dollop over the horseradish crème fraîche, drizzle with some olive oil and sprinkle over rest of the dill or fennel.

Stir together vinegar, onion, apple, soy sauce, and sugar until sugar has dissolved. Then stir in oil. Just before serving, toss watercress with enough dressing to coat. Quarter, pit, and peel avocado, and cut crosswise into 5mm slices. Gently toss with watercress. 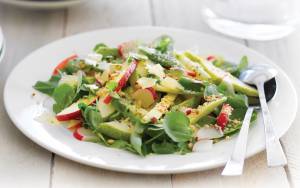