When Russian pianist Pavel Kolesnikov (born 1989) made his Wigmore Hall debut in January 2014, The Daily Telegraph awarded a rare five-star review and called it “one of the most memorable of such occasions London has witnessed in a while.”

Pavel was born in Siberia into a family of scientists. He studied both the piano and violin for ten years, before concentrating on the piano. He has studied at Moscow State Conservatory and  Royal College of Music.

Pavel lives in London and prizes his collection of old perfumes which includes specimens dating back to 1920s. His other interests include painting, photography and fashion. 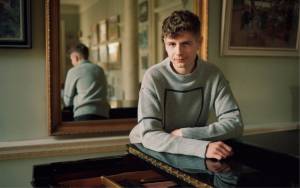 Pavel’s first suggestion was pirozhki – little pastries with literally any filling: from cabbage, meat or crab or mushrooms to apples, cherries or strawberries.

Then he changed his mind “Since pirozhki is a bit complicated I am sending you a recipe of Russian pancakes. This is a pancakes recipe by a wonderful Russian writer Tatyana Tolstaya. She claims a curse would fell on anyone trying to alter it in any way and the pancakes will stick to the pan. I did test it out and can assure you the curse is definitely in place.” 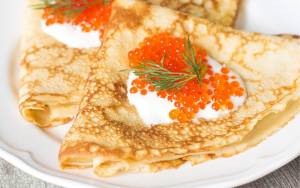 Blend all the ingredients together in the order listed above. Add one after another while working with a handheld blender. You’ll be surprised by the amount of foam! When the batter is ready put a medium sized pan on high heat. You’ll need literally a drop of sunflower oil on your pan for the first pancake, but no need to add any more later – there is oil in the batter. Quickly pour and roll the pan to make sure the batter is evenly distributed. Turn as soon as the pancake looks firm (use a thin turner) – it should be just turning golden on the other side.  Russian pancakes are very thin, and it takes a bit of practice to learn to make them. Don’t despair!

You’ll need to just gently grease each pancake with a little bit of butter as you’ll be piling them one on top of another on a plate. You then can eat them just like that with caviar, or with sour cream and jam or honey. Or you can stuff them with any filling that comes to your mind.