News
Jump to
JUMP TO

TV presenter and author Bamber Gascoigne has died at his home in Richmond after a short illness. The 87-year-old – famous for being the original host of BBC’s University Challenge – had been married to his wife Christina, a potter, for 55 years.

In 2014 Bamber Gascoigne inherited from his aunt, the Duchess of Roxburghe, the Surrey estate of 14th century West Horsley Place. He was quick to agree with Grange Park Opera, that they should build an opera house in the woods behind the ancient orchard. Bamber and Christina have been very closely involved in everything that has happened at the Theatre in the Woods.

David Pountney pays tribute: “Bamber Gascoigne was a figure from another age, a better one I fear than ours. A polymath with wide ranging interests, he was highly intelligent, erudite and articulate but all of this was presented with a relaxed lightness of touch that endeared him to many people less intellectually equipped. He was a man whom Samuel Johnson might have recognised and admired, a conversationalist. He might invite the quip that he didn’t do much but he did it extremely well, but this would be very unfair, as the long list of TV programmes, books and documentaries shows. As a kind of fairy tale end to the latter part of his life, he found a home for an opera house – an achievement both slightly dotty and admirably patrician. His charm and his generosity will be severely missed.” 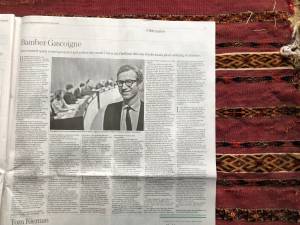 Joanna Lumley pays tribute: “It seems to me that Bamber encompassed everything that is good: he was recklessly generous, extremely funny, kinder than sunshine and as brainy as the Mekon. Except for when he was carving his place in history by hosting University Challenge, I only ever knew him as Bamber-and-Christina, and our thoughts and love race towards her at this saddest time. I think I know what giants are, and he was one. Rest in peace, wonderful friend.” 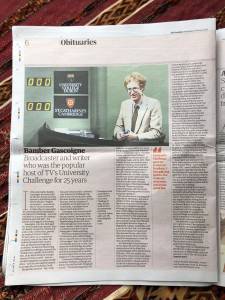 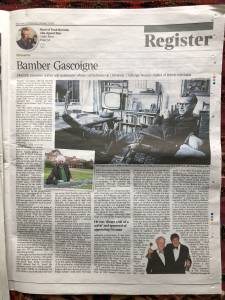 “I have had two very great surprises in the past eighteen months. The first was the unexpected news that I had been left, by a 99-year-old aunt, Mary Roxburghe, a beautiful house in the country. A week after her death I received a request to go to a solicitor’s office. On arrival I was handed her will. I did my best to look calm and collected while they provided a cup of coffee and biscuits.

The other great surprise was provided by Grange Park Opera. A small group of their trustees paid a visit. Again over coffee and biscuits, they described their proposal and asked Christina and me if it might be acceptable. It didn’t take us long to say ‘Yes, indeed’.

It isn’t every day that you are invited to have an opera house in your garden.

It was obvious from the start that West Horsley Place is perfect for an opera season. They are planning to build the theatre tucked away romantically in a wood. A short path through the wood will bring opera-goers to our orchard, a magical place of amazingly old fruit trees. A wrought-iron gate leads visitors into semi-formal gardens, areas of mown grass separated by ancient box hedges, which I can imagine already full of the bright tented pavilions for which Grange Park Opera is famous.

And then the house itself. Amazing . . . and I could go on and on. But it is enough to say that the ground floor, an unbroken sequence of Tudor stone flags leading into the garden, has space for 150 people to dine in style.

Roll on the first night!”

Bamber will be missed by everyone at Grange Park Opera.